Leave a review on a broker Refund money from broker

Attention! The company is a scammer!

To get a refund from a fraudster, leave a request.

License: no Regulator: no

Online broker TrendsTurbo advertises its services to traders all over the world. The presence of this dubious broker is not observed only in America, France and Israel. It is possible that the swindlers simply did not manage to circumvent the extremely strict legislation of these states. In fact, the reasons for such a choice may, of course, be several, and we can only guess about them because the company does not inform the visitors of its official website.

The broker itself presents itself as a large company, which serves thousands of customers around the world.

The company stresses that it is highly qualified in the field of trading and cites the fact that it manages to thrive in the conditions of global financial and economic instability as an example.

That's not much of an explanation, to be honest. Trading is mostly a lottery, in the process of which one can both do well and face financial losses. The sphere of trading is especially popular in the period of financial instability, when the desire to break the circle of failure in one click makes potential traders inattentive, i.e. a tidbit for crooks.

On its official website the broker offers four types of trading accounts, which are traditionally called Bronze, Silver, Gold and Platinum.

The minimum deposit amount is $250. The practice of making reviews and numerous reviews say that such an amount is, as a rule, the evidence of a well hidden fraud. That is, between the trader who invests in the platform and the broker who acts as an intermediary, there is also a so-called "pad", i.e. a person or company through which the transfer of funds takes place. Sometimes there is only one such organization, but their number is unlimited. The trader will never know the scheme of the invested funds transfer. At first glance, this seems unimportant information, but in case of lawsuits and requests for refunds, it will be impossible to prove the transfer of the capital: the trader signs a user agreement with one company, and the scheme is designed so that no funds are deposited to its account, because the flow goes to other requisites. Consequently, it is impossible to receive anything.

It is also worth noting that on the platform of the broker TrendsTurbo the conditions on the trading accounts are surprising. For example, the package of conditions available for the minimum deposit is much more interesting and profitable than for those where the initial deposit is required many times higher.

Either it is another smart move of swindlers, designed for inexperienced traders, who will be charmed by profitable offers, or the information does not correspond to reality.

On the platform you can trade the following assets:

According to the terms and conditions for the trading accounts spelled out on the company's website, the spread for the more expensive accounts is provided at 2.8 pips. This figure is already lower than traditionally stipulated for the chosen sphere. Some inexperienced traders may find this fact positive, but an experienced trader will only be more wary of this questionable project.

A significant disadvantage to the minimum trading account is the lack of EA service. It is novice traders who are in dire need of Expert Advisors' advice and support. It is possible that the broker does not even plan to solve traders' problems, just takes the deposit, justifying it by mistakes, failure, in general, the fault of the trader himself.

How does the broker advertise himself on the pages of his own website? It mentions the use of high technologies, modern methods of work, spreading numerous complimentary descriptions about it.

Among other positive descriptions, the broker indicates the commission equal to zero as an advantage.

This is more than strange as brokers usually earn on commissions. Brokerage companies with a good reputation usually indicate commission rates.

In general, the conditions are poorly described and the information is definitely not enough, especially for beginners.

It is possible to argue about the proposed conditions, to consider them positive or negative, although there are many questions about them, but no one will argue about the compulsory existence of a broker's license.

Let's check how legal is the broker TrendsTurbo, whether this company has the license, issued by the authoritative financial regulator or we deal with the usual crooks under the guise of the respectable and popular international broker.

The footer of the website indicates that the TrendsTurbo project belongs to the company KMA LLC, registered at St. Vincent and the Grenadines.

This is an offshore zone where fraudulent projects and companies are usually based. All indications are that we are dealing with such an organization.

Our fears were confirmed by an unpleasant but generally foreseeable find. There are only a few mentions of a company called TrendsTurbo on the web, i.e. in the major search engines Google and Yahoo, which are used by the vast majority of the planet's users.

One of these mentions is a warning that the broker is not licensed.

The official website of the main financial regulator, to which the address on the site refers, can help us check this information. By the way, the FSA regulator has an extremely low reputation because it deals with fraudsters.

We check both the subsidiary company and its owner.

The answers are identical. In spite of the fact that the broker indicates the license number on the site.

Let's turn to a free service to verify the data on domains and IP addresses WhoIs. 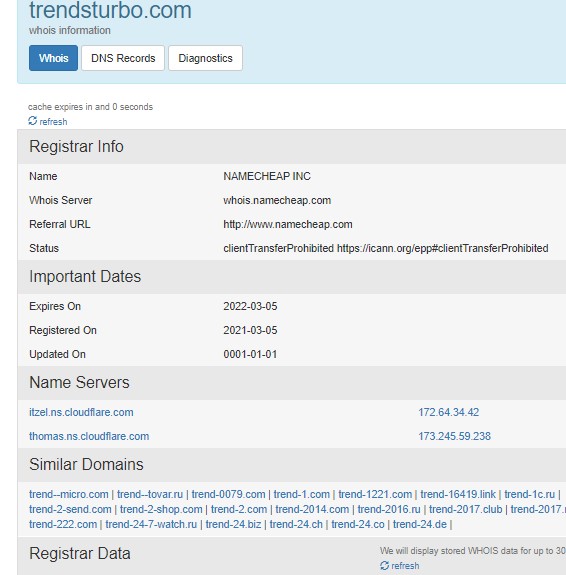 According to the query, the site has been up for about a month: the registration date is March 5, 2021. What years of experience can we talk about? This is a shameless deception.

Summing up the results of the check on the presence of a license and in general any registration documents online broker TrendsTurbo can safely call the company frauds, which have no legal right to carry out any financial operations. They take their customers' money illegally, deceiving gullible traders.

As for the reviews, there are simply none. As we said above. Mentions of the company in the network only a few. By the way, even the official website of the broker is not easy to find in a search.

Instead of reviews - negative or positive, you can read a couple of custom articles in which the broker teaches traders how not to get caught in the nets set up by numerous scammers.

Ridiculous, isn't it? Although, traders who lost their deposits and earnings are unlikely to agree with such an opinion. There is no information about the withdrawals. But such secrecy and subtlety of the world-known international broker is very alarming.

It is scary and very unreliable to entrust money to such an intermediary. In case of problems or deceit there is nobody to ask for protection from - unlicensed brokers are almost impossible to catch - they simply do not exist for the financial control system.

The lack of reviews can be explained as follows. Most likely, the company tracks the emergence of negative reviews and blocks them, pays to make them disappear - in general, does everything possible and impossible to "whiten" its reputation.

Or the second option, which is more likely: the parent company launches several projects whose task is to collect as many deposits as possible and "drain" the capital of the clients. When the number of dissatisfied people grows, the project will be closed and the next one will take its place to keep the financial flow.

Safety and security of funds with TrendsTurbo

To begin with, when agreeing to cooperate with the online broker TrendsTurbo, the trader must realize that he will not find the protection of the regulator, because the company is a fake and is not regulated by law. Moreover, if you carefully read the section of the Terms and Conditions, the broker directly informs that he removes all responsibility for any troubles that may happen to the trader in the process of using the trading platform.

The broker speaks about it more than once, emphasizing that all responsibility falls only on traders.

Probably the broker counts on the fact that most people consider standard documents in small print and rarely read them.

Be that as it may, with such cooperation the broker can do as he wants and no one will be able to stop him as there are no mechanisms of control of uncontrollable swindlers.

No matter how much an online brokerage company praises itself, the TrendsTurbo project is a typical scammer, which is more of a phantom than a respected and prosperous financial institution.

It's alarming that the company, while touting years of experience and thousands of clients, doesn't have a single review, just a few custom articles.

If you want to stay with your money, we highly recommend you not even to try to make money with such an intermediary. In this case, the outcome of such trading is absolutely predictable and extremely sad - the initial deposit will be spent quickly, the broker will recommend to add more to make the profit significant, but as soon as the trader refuses to give in to persuasion, his account will be blocked and the calls, letters and other attempts to contact the support team will be ignored.

The editor-in-chief is a key figure in our team. He not only controls the quality of work of all employees and checks expert reviews at the final stage, but also forms a content plan, a website development strategy and tries to work for a result. He is a perfectionist, has an unconventional mindset and a broad outlook. Life motto: "Honesty is the most precious thing."

TrendsTurbo does not withdraw funds?

Learn how to get your money back