Polkadot's development is based on a comprehensive representation of the network, which applies the pioneering work of previous blockchain networks with the offerings of its own fundamental advantages.

The creator of Polkadot is a British computer programmer, Gavin Wood. He is directly related to the second largest cryptocurrency by market capitalization and platform for the creation of decentralized online services based on blockchain, Ethereum (co-founder). He also served as Ethereum's first chief technology officer, chief developer (until 2016).

In fall, 2016, in tandem with developer Marek Kotewicz, Gavin Wood created the first draft version of the Polkadot white paper.

In parallel, Wood and several Ethereum teammates launched EthCore (later Parity Technologies), a commercial blockchain development company that created the Polkadot network as well as the Parity Ethereum Client, the Substrate framework (a platform for blockchain innovation), and the multi-sig wallet Parity.

In mid-2017, thanks to Wood and developer Peter Czaban, the Web 3 Foundation, a nonprofit organization for the development of decentralized Internet software protocols, emerged. Thanks to one of its first tasks, controlling funds raised during the Polkadot ICO (October, 2017), the project managed to raise $145 million (selling 5 million native DOT tokens).

The purpose of Polkadot technology

The creation of Polkadot was conceived to return control to individuals from Internet monopolies. To remove the obstacles of blockchain technology on the way to full-scale practical application.

This is the problem of scalability. Network growth is constrained: first-generation blockchains (Blockchain 1.0 categories) - Bitcoin, Etherium - are unable to process huge numbers of transactions in the so-called decentralized world of the future. Network nodes now use a one-to-one format when processing transactions.

Polkadot, as a sharded multichain network, can process multiple transactions in parallel across multiple chains. In the process, the bottlenecks that arose in previous generation networks (applied sequential transaction processing) are eliminated.

This is the problem of isolation: blockchains, being separate and independent, need two-way communication and interoperability.

Polkadot technology simplifies crosschain transfer of any data (asset types), not just tokens, by enabling interoperability across a wide range of blockchains.

As a result, these independent blockchains can exchange data and transactions seamlessly via the Polkadot relay chain.

The core of the Polkadot ecosystem is Parachain or Parallel Blockchains. They are the basis for the formation of various applications.

A blockchain consists of the following elements:

These are separate blockchains with unique characteristics that can be managed independently. The processing of actions in a parachain occurs in parallel, which guarantees high scalability of the system. It is also possible to process a much larger number of transactions in the same period of time due to the ability to distribute transactions into chains.

After transactions are made, they are transferred to the original blockchain. It is an application-specific data structure that is globally coherent and validatable by the validators of the Polkadot Relay Chain. New Parachain are added by linking tokens.

For a reward, Parachain builds collators (analogous to miners in blockchains with Proof-of-Work, Proof-of-Stake algorithms) where they collect user transactions and validate blocks based on the Proof-of-Validity algorithm.

The size of the reward is determined by the specific parachain.

The tasks of the Relay Chain mechanism (a blockchain with a pool of validators, who are randomly required to add and validate blocks in different parachemes):

Each transaction requires a deposit from validators.

Does the transaction comply with consensus rules? So the deposit is returned and the validator gets an additional reward. Otherwise, the deposit is lost.

The methods of reaching consensus in the relay chain

This is accomplished through two mechanisms, each activated on the principle of personal responsibility for each:

Description: an algorithm for generating blockchain-retransmitter blocks, which includes the headers of all valid (accessible) parachain blocks created by the collators.

Operation: based on time slots (slots). Has the right to produce a block in a chain-retransmitter in a certain time slot randomly given to the validator (slot leader).

The right to produce the next block is granted by calculation using a verifiable random function.

The BABE model is similar to Ouroboros Praos (the block production component of the Cardano consensus protocol.

Description: a finalization mechanism where each validator votes for the highest (validated) block (in fact, all block ancestors are voted for).

Operation: those blocks are finalized for which more than 2/3 of the validators voted (with steaks). Access to instant finalization of multiple blocks causes it to take longer for validators to reach consensus on finalization than it takes to create a single block. As a result, GRANDPA supports more validators than traditional BFT algorithms, which finalize each block separately.

The problem of scalability limitations in protocols with instant finalization is eliminated by separating block production and finalization (example: Tendermint). As a result, the block production process is accelerated and more validators have access to participate in consensus building.

Validators are the people who search for and approve validators. The procedure is as follows:

A deposit is paid for the validator. The amount will be forfeited if the behavior of the selected validators does not comply with the consensus rules.

Nominators are denied access to participate in the transaction execution/confirmation process.

Watchdog nodes, fishermen, monitor the validators. It is their function to create proofs with data about conflicting validator votes. Their work is paid for by a share of the violators' confiscated bets.

Due to the chosen scheme of work, GRANDPA provides asynchronous controlled security. That is, in the finalization of any two conflicting blocks, the responsible validators lose their deposits (about 2/3 of the total deposit volume).

If the block production mechanism meets the approved criteria, the finalized chain continues to grow.

With this compromise, Polkadot operates under a simple communication mechanism that allows parachain collators to work directly through incoming/outgoing message queues.

Features of using the finalization mechanism by parachayers

Using the same mechanism, each validator can: 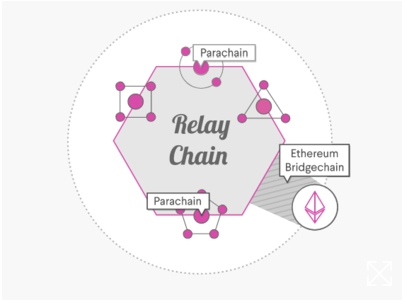 These are tools that greatly simplify the development of specialized parachain applications.

An example of PDK is the Runtime Aggregation framework Substrate (together with FRAME (Framework for Modularized Entities).

Cumulus Composition (another PDK): the linking code, without which it is impossible to link the chain to the Polkadot network (based on Substrate).

The linking of parachains to the Polkadot network is more easily formed with Substrate and Cumulus.

The first version is a work of 100 parachains.

Future versions will allow a parachain to act as a layer 2 relay-chain with additional auxiliary parachains added. In the tasks of additional parachains, a tree structure is formed, which in theory can provide unlimited throughput. Each of such "branches" can have an original architecture. This component is used for transactions, among other things.

Over time, the key chain-retransmitter is transformed into an element that limits the efficiency of the system. The purpose of the limit is to validate the processing of the input queue due to the direct mutual communication of parachains.

According to statistics, due to the tree structure device, Polkadot can scale up to 10,000x the capacity of a single PoS chain.

The 3 main functions of the native DOT network token are:

DOT tokens enable the basic Polkadot consensus mechanism. The token holders must be active members of the network who:

Active members of the network are rewarded with tokens.

Profit from the initial token sale (2017) of $145 million was insufficient to fully develop the project.

An additional 500,000 DOT sale initiated by the Web3 Foundation (2019) sale increased the project's capitalization to $1.2 billion.

In the late fall, the project released Substrate, a blockchain startup platform. The goal of the tool is to increase the speed of Polkadot's development and access for corporate users to quickly launch distributed registries.

In late summer, Polkadot announced the launch of the Kusama network, a pilot version of the blockchain interaction protocol.

As conceived by the developers, it was to:

The Kusama network was based on the Proof-of-Authority consensus mechanism.

The validator node functionality was overseen by Web3 foundation.

This pilot did not allow for an expansion of the network's functionality.

By spring, the Chainlink project had completed an initial integration with blockchain based on the Substrate platform. According to Polkadot developers, this moment went down in blockchain history as an important outcome in the integration of Chainlink's decentralized oracle network into the protocol ecosystem.

By providing reliable third-party information channels, it is possible for different networks to interact and expand the scope of smart contracts and dapps.

Polkadot's primacy is not expected to be limited solely to the Ethereum system (where Chainlink oracles are used).

Even before Polkadot's core network is up and running in full, Chainlink's information channels will serve the experimental Kusama protocol.

The parachain development work between Kusama and Chainlink is ongoing.

In March, the company funded the development of a "bridge" that aims to connect the Bitcoin and Polkadot blockchains.

The project was led by Interlay. Thanks to the XCLAIM framework at the core of the bridge BTC-parachain, it is possible to issue PolkaBTC tokens backed by Bitcoin.

The tokens will be transferable to other parachains. When PolkaBTC is burned in a BTC parachain, users will have access to receive Bitcoin (1:1 ratio or equivalent amount in DOT tokens).

The first phase of the Polkadot core blockchain network launch

In May, the Web3 Foundation launched the first phase of the Polkadot core blockchain network (which was a test on the technical side). The network subsequently used the Proof-of-Authority mechanism.

Node operation and block validation were ensured by the company, which had access to an immediate response in the event of a critical situation in the blockchain process.

Audit findings were received over the summer, and final aspects were finalized.

The Polkadot blockchain moved into the NPoS (Nominated Proof-of-Stake) phase.

Interlay announced the introduction of a "bridge" between Bitcoin and Polkadot blockchains (in the Proof-of-Concept state).

Until the end of the year, Polkadot, Cosmos and Terra developers were developing the Anchor DeFi-protocol. The purpose of the protocol is to give investors access to interest income on Terra's stabelcoin deposits.

There are 197 validators recorded on the network. The project began using the validation process on a decentralized model with community participation.

In July, the Web3 Foundation ceased acting as administrator of the Polkadot network.

The Polkadot network's voting results led to the revocation of the "CC1" label, i.e. "Candidate Circuit 1."

This was the transition to the main network and the beginning of the third and fourth phase of the launch.

A vote by validators in late July ruled:

Web3 Foundation and Parity Technologies did not participate in the vote.

In August, Polkadot announced the launch of the Rococo test network, which aims to introduce parachain-based sharding.

Rococo's goal is to test Polkadot's protocols, which will enable communication between shards.

Rococo has access to three separate parachains to which developers will be able to add their own parallel chains:

Support for a horizontal messaging test network is announced.

According to the developers, the system is still under development, so it is not stable.

Gradually the work will be stabilized in the process of the full launch of the main network.